Although I’m not the biggest Baseball fan in the world, I do have a soft spot for Baseball movies. For some reason, they bring out the best of the Sport genre; they can be funny/legendary (Major League), sensitve/drama (For the Love of the Game) or just making a great movie from a fantastic book (Moneyball). With good reviews, Harrison Ford (finally in a meaningful movie again) and a script by Brian Helgeland, I was expecting to see a pretty decent movie. And that’s ultimately what it was, a decent but not fantastic movie. The sad part about that is that with this historic context on what Jackie Robinson did for Baseball and human rights in the US, it could have been so much more (a similar problem which Lincoln had as well – granted that movie was much worse in my mind).

Let’s get to the specifics: there are without a doubt great elements in this picture and my favorite one is Harrison Ford; he is a great cast for the grumpy but visionary Dodgers Manager Branch Rickey who sees the bigger picture in having an african-american player in Major League Baseball. Also Chadwick Boseman (which was a risky bet) plays his role pretty well – given the fact that this movie is his first big production. The baseball game action is nicely put together and the intensity during these games is well captured. But as the movie goes along, there were some parts which kept bugging me; and I think it all boils down to a sub-par script (which is nothing Brian Helgeland is known for). It almost feels like the movie wants to touch every aspect of Jackie Robinson’s life without really going in-depth on anything – and granted it is not an easy task to capture the life and impact of the first black baseball player in the US. Seemingly, the script is very well-intended but it touches too many things to be really good – an easy trap for biopics to fall into. And aside from the main cast, the supporting characters were a little too “simple” and forseeable for movie which deals with racism in sports history. You have the guy on the team who denies to play with 42 on the one side, the other team mate who wants to be fair and give him a chance and then of course the evil redneck coach from the other team who is trying to provoke. Along with these one-dimensional characters came some pretty simple dialoges – they could have been so much more sophisticated and pointed. And in some instances, there are indeed great dialoges (especially between Jackie and Mr Rickey) but the flatness of the bad ones annoyed me a little too much. Another element which lacks perfection here is the score; sports movies – especially with a historic subcontext – offer the opportunity to underscore your message with a great heroic “Hans-Zimmer”-like score and add more tension to the movie as it goes along. And I felt, that 42 fell somewhat short in this area as well.

Having said all that, this certainly was not a bad movie but all in all somewhat too PG for my taste. And maybe that is something which was done in a conscious manner with a certain audience in mind (families, younger kids and teenagers). It was certainly good family entertainment and and an interesting story but I was more hoping to be wow’ed…and well I wasn’t. 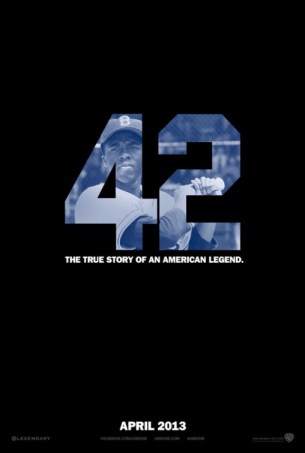