Operation: Be-able-to-make-a-qualified-opinion-about-Best-picture continues. Tonight, it was time for the latest movie of the great Quentin Tarantino “Django Unchained”. One thing in advance, I really hope that QT will be making movies for a long time. The detail, the music, the dialogues and the “events” he pulls off in his movies are just so unique that he literally created his own genre…a Tarantino. In a nutshell, this was a good and entertaining movie BUT with all the expectation a “Tarantino” is coming, this wasn’t a great movie.

When it comes to acting, Tarantino seems to be in favor of a club of people and always one newbie who is allowed to enter this club…this time around it was Jamie Foxx and Leonardo Di Caprio who got the invite. My guess is that Di Caprio will receive another one, but Foxx probably won’t. The performance which Leo delivers once again shows that he is one of the best actors of our times. He has grown so much over the years and with this act he shows once more how versatile of an actor he is while keeping his own personal style. I was never a big fan of Jamie Foxx as an actor even though I liked some of his movies like Any Given Sunday or Collateral. There is just something about him that always seems like a generic and lackluster acting style and I don’t dig that particular style. Coming back to the Tarantino Club, I think that Christoph Waltz is on his way to achieve the legendary Samuel L.Jackson status, and not without a reason. He once again shows a brilliant performance as the German Bounty Hunter and – for a change – you can actually root for him. In my eyes he was the real lead actor in this picture. Both as a german and a movie lover, I’m really happy to see him become such a well respected figure in Hollywood, and he didn’t even have to “De-German-ize” himself for that (in fact this was one of the most pro-German US-movies in a long time). Samuel L.Jackson yet again delivers an outstanding performance and it almost feels like Tarantino doesn’t need to give him instructions on how he would like him to carry the dialoges, Jackson is just a natural and is a fantastic addition to this brilliant cast.

If you look back at the 90s and 2000s, Quentin Tarantino contributed vastly to some of the best movie scenes, we have had the pleasure to enjoy (SLJ monologe and John Travolta dance with Uma Thurman in Pulp Fiction, Christoph Waltz slaughtering introduction in Inglorious Bastards or the crazy-88 against Uma Thurman in Kill Bill Vol.1 amongst others). Again he shows this talent to create these fantastic scenes and dialoges paired with a unique soundtrack as well as the typical Tarantino humor of making something awful actually look funny (such as the KKK scene in this movie).

In the middle of the movie, I thought “Wow, Tarantino just rocks…whatever he touches becomes a brilliant masterpiece” but that is when the picture started to lose its greatness. In this day and age, your average movie length varies between 110 – 140 minutes and if a director takes it upon himself to shoot 165 min – and Tarantino certainly deserves this privilege – one has to be aware that the audience has to be entertained even more or it has to be that much more exciting. Movies like “Pulp Fiction” and “The Dark Knight” did a great job with that, you never start looking at your phone or your watch…all you watch is the movie. This wasn’t the case for Django, it was just this magical 30 minutes too long. As mentioned earlier Tarantino yet again has this magic of creating these perfect individual scenes – which we might remember for some time – but as a whole the movie didn’t feel well composed to me. The built-up was too long – even though with some great Di Caprio and SLJ scenes – and the finale seemed too rushed and a little too “easy”. I just expect better from Tarantino.

Overall, this was an entertaining movie – as expected from Tarantino – which is worthwhile watching. The acting by the entire cast is fantastic with Di Caprio being my personal favorite and there are some really great scenes with typical Tarantino-esque music and cutting. Most definitely not his best work but you can’t always redefine a genre. Sometimes, you just want to shoot a fun movie … and that it is. 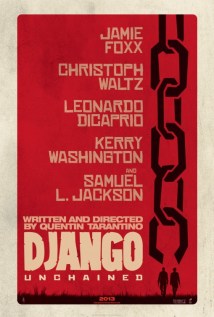