Let me start with the my summary of the movie before actually reviewing it … Iron Man 3 is the perfect summer blockbuster with just the right amount of everything. This production normally stands for a lot what I dislike about Hollywood; finding a popular superhero niche and milking the cash cow as much as possible and while doing so killing the ingenuity of the character. And yes the cash cow is being milked but the ingenuity and fun of the franchise stays intact and improves significantly over the meh Iron Man 2 (I have actually completely forgotten what it was about).

The basic story is told pretty in the trailer (and no it is not one of those trailers which basically gives away the entire movie). In a nutshell, Iron Man is having an identity crisis (superhero or loving husband), can’t really sleep and is in fear about losing the only thing he can’t live without – the beautiful Gwentyth Paltrow (who would blame him). And then there is this super scary super villain played by Ben Kingsley who seems indestructible and always one move ahead.

As mentioned above, I went into this movie with the expectation of watching an overblown action spectacle with a way too full of himself main actor in an inferior script and Michael Bay’esque amount of CGI directed by an ok-director Shane Black who is more of a script writer and is already way beyond his prime. But my expectations were not met…because watching this movie in a 3D-IMAX theatre was absolutely awesome. Giving birth to the Iron Man franchise was certainly a great accomplishment by Jon Favreau but the second installment just couldn’t really keep it up and thus handing over the reigns to a new mind was a great move by the studios. Shane Black gave the franchise a great new touch and directed the perfect summer blockbuster. Not once throughout the entire duration of 130 minutes did I check the time, even though it was a late showing and my movie ADD’ness.

Robert Downey Jr is great as usual and brings the right amount of self-irony (him and Shane Black seem to have great chemistry as seen in Kiss Kiss Bang Bang). With Ben Kingsley, the superhero movie franchise has found a new definition of greatness – he adds just the perfect ingredient to this movie (that’s all I will say right now) and Don Cheadle is always a character who is fun to watch. Whereas Gwenyth Paltrow seem to have shifted more into the business of writing about eating healthy and being annoyingly good-looking, the role of Pepper Pots (just suits her really well) and I would dare to say that this is yet her best performance in the franchise.

Typically, the superhero franchise doesn’t put in a lot of effort into a decent script (setting aside The Dark Knight Trilogy). Admittedly I was pretty impressed with the plot and the script, it wasn’t as one-dimensional as one would expect (as seen in e.g The Avengers). And most importantly for a movie like this … the action; it was perfectly shot with just the right amount of CGI and with a good message of “hey we are all just having fun here”. As we have seen in past action sub-par action/superhero movies, it is an easy task to make a big production and take it completely to shit (Battleship), it only requires one element to be out of balance. And that’s what made Iron Man 3 so good.

It is really hard to find bad things about this movie, since everything seems pretty intentional. All in all it was a great and entertaining summer blockbuster. I will close with the advice to watch in IMAX 3D if you get the chance…it is really worth it. 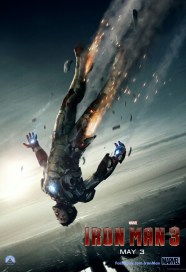