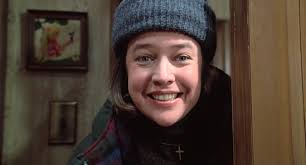 One more big hole in my movie database was filled over the weekend. This movie is shot with such simplicity and little ‘sourroundings’ with a total focus on the inter-relationship between the 2 main characters and a Kathy Bates which plays the best act of her career. She is so disturbingly bipolar and psychotic that it would freak out even the toughest viewer (as in me) … The Oscar she received for this role was totally deserved. If you haven’t watched it yet, this one of the better movies on netflix streaming 🙂