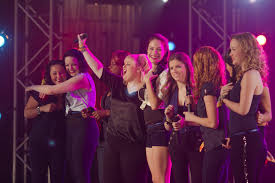 What do you have to say about a movie which is mainly based around pop music and acapella stand offs? Well, I kind of was talked into watching this one, but after the trailer, I just thought…Hell yeah. And after the movie, I thought the exact same thing. Now obviously this movie is uber-cliché in almost every aspect…guys dancing against girls at a night’s pop and RnB stand off; I mean who does that. But one great theme throughout the entire picture is that it never takes itself serious at all and it has only purpose for both the cast and the viewer…just have fun. And it somehow manages to make a guy wanna go to an Acapella song standoff or even competition. In addition, all the cheesy kneeslappers which are being thrown into the actors faces are just so bad that the producer can’t have intended them to be actually funny. Anna Kendrick shows that she can pull off playing about every character in the 20s (college freshman, young professional and newby psychologist). The entire cast is just enjoying the show, which is pretty fun to watch. In the end, it kind of felt like an hommage to “Over the Top” for Acapella singing … (if this is actually thing). Not a classic but a fun night with the family and the kids…