The Dark Knight
Easily one of the best movies in the 2000s and the re-definition of dark and gritty reboots. Simply fantastic !
Acting
Directing
Script
Cinematography
Timeless
The Good
The Bad
2012-06-06
5.0Overall Score 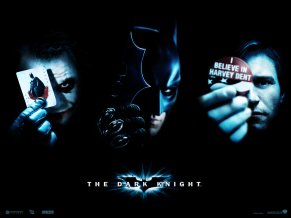 To get myself in the mood for the movie of 2012, I took out the Dark Knight from the my shelf…and even after the 3rd, 4th or even 5th time, this movie is just a brilliant masterpiece. Everything blends so perfectly together starting with the cast – yes, obviously the brilliant Heath Ledger as Joker but also Morgan Freeman, Michael Cane, Gary Oldman and Christian Bale play their parts perfectly. The Nolan brothers created the perfect script and improved significantly on their first masterful adoption of Batman…not only does it create the perfect film-noir atmosphere but it also silently captures America’s post 9/11 society and its fears. Last but not least props go to my German buddy Hans Zimmer who once again deserves the credit of being always the perfect choice for big and epic Hollywood blockbusters…Christopher Nolan didn’t take on an easy job in trying to trump this masterpiece with TDKR.