On my most recent plane, I felt compelled to watch another 90s classic and just be entertained. My choice was to enjoy “The Fugutive” which is already 20 years old…which basically means that I’m entering an age where I can call movies from my childhood classics; movies from a time without internet, smartphones (or hardly even cellphones) or somewhat decent taste in clothing.

First and foremost I have to say that this a great movie. Both Harrison Ford and Tommy Lee Jones are just awesome to watch here. With no “foreplay” whatsoever, the movie accelerates to full speed within the first 15 minutes which is entertainment at its finest. I can still remember watching this movie on our local cable channel in Germany (I’m pretty confident this is RTL2’s most broadcasted movie of the 90s) and it was even good with German voice over. 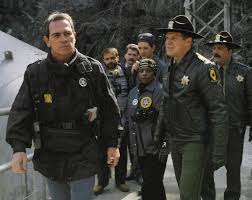 SPOILER ALERT: I tried to recapture what were the things I like so much about this movie. Aside from the high speed start, the introduction of the US-Marshals is just awesome…such an “average” bunch with such determination, orientation to details and loyalty to their “Big Dog” – the legendary Marshall Samuel Gerard. I also think that that the trailer with TLJs motivational speech outlining the scope of the manhunt is movie history today IMHYO. Other aspects which are great (and making the movie sort of an old classic) is the manhunt without the technical capabilities of today – just compare it to the contemporary Zero Dark Thirty or even Enemy of the State in early 2000…it just feels like the good old times. This movie is so good that it is fully forgiven how it humors the laws of physics with Harrison Ford’s ridiculous jump but at that point the movie had totally earned it. Also the hunt in the courthouse is nothing short of awesomely intense.

A few notable side notes are that the movie actually also starred a very young Juliane Moore as well as Jane Lynch from Glee (!) who were in the very early stages of their careers. Also in case you are ever planning an ugly sweater party, this movie would be a great starting point to gather some intel.

All in all, one of the best movies of all times. Entertaining, intense, suspenseful and enjoyable duel of two absolute superstars at the peaks of their careers as Action heros.