This is the second time I watch this movie and after I really enjoyed “Zero Dark Thirty“, I thought it was only fair to give Kathryn Bigelow a second chance. After she directed one of my all time favorites “Point Break” and “Blue Steel” – one of the first R-rated movies I remember watching at a very young age and thus having sentimental value to me.

The first 10 minutes are really one of the strongest and most intense openings in a long time. And it sets the tone pretty well with the audience. With Jeremy Renner entering the movie and having his first “defusing” mission, the character development and the potential conflict is set pretty nicely. Also throughout the entire movie, I was really stunned about how well the explosions were shot and also how well the intensity of the “defusing” was captured. The way the characters are dealing with the trauma being in these absolute high intensity situations is really interesting and it resonated with me quite well. The soldiers know that their life can be over any minute and ultimately nobody outside their friends circle will really care – which is maybe a small jab against the deeper meaning of war.

The acting of Jeremy Renner was good overall but his super cowboy behavior bothered me – because it was just annoyingly reckless and seems somewhat  one-dimensional to me. To be fair, the shower scene tried to show his inner daemon and desperation. I truly enjoyed Anthony Mackie in this movie, he is a much more consistent and yet very torn character. He plays the role of the more responsible Sergeant who sticks to the rules and wants to survive this war but also doesn’t really know what’s waiting for him afterwards was very well played.

There are also a lot of elements which really bothered me about the movie, and these elements were the same ones which made me think of this movie as an ok but far from “near perfect”. The script which was so highly praised was actually not that compelling to me; even though Mark Boal manages to create an intensity of life-at-war which is captured really well by Kathryn Bigelow, I felt that the entire movie ultimately was no more than a series of bomb defuses with each one being more intense than the one before. [SPOILER ALERT] And in the end, Jeremy Renner goes home to his wife and child and doesn’t actually join enjoy being with them, because the only thing he is good at is to defuse bombs. Now that I write this paragraph, I can somehow sympathize with the thought process – since I’m sure it is sad reality that soldiers returning from war notice that this world is not the environment they can thrive in [SPOILER END]. Also the message of “War is a drug” is somewhat alienating to me, I understand that some soldiers thrive at war, always being on edge but in the end [SPOILER ALERT] I really didn’t like that Jeremy Renner basically can’t wait to get back in the field rather than being with his loved ones…but maybe that’s just me.

All in all, this was a fantastically shot movie with a solid cast but the script and the morale of the movie did leave a sour taste with me…and that’s I didn’t really love this movie. 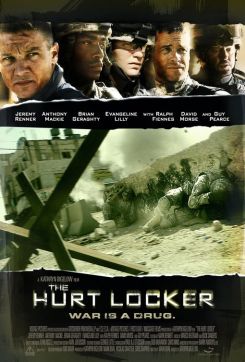