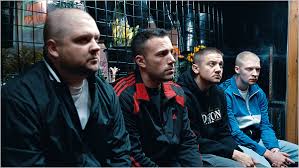 Movieweek… admittedly the parallels between The Town and Heat are indisputable and obviously hard to beat. Nevertheless this was some really good work from Ben Affleck. As much as he never found the real peak as an actor, he might have found his destiny as a director. After Gone Baby Gone, he creates yet another great portrait of Boston’s lower class – their struggles and their respective destinies. The atmosphere with authentic actors and a great city shots of the Town make the movie one of the best movies in 2010….Recommendation: Go see it in the theatre !!!!