After very high expectations throughout the last year about a new Judd Apatow movie with a highly promising cast, I was already somewhat let down to learn that the RottenTomatoes ratings were only in the 50s. Having said that, there have been times when I still did like the movie a lot despite rotten ratings (e.g. American Reunion was awesome in my mind). Anywho, I decided not to go the theater and come back to it with a fresh mind and that’s what I did yesterday evening. And my personal opinion is that it certainly does its funny moments, a very likable cast but just too many low (aka unfunny or try-hard-to-be serious) moments and it doesn’t even come close to the better Judd Apatow movies.

As with most better R-rated comedies, the movie starts out pretty strong with a lot of great punchlines and it promises to be a fantastic ride. Every couple watching this movie will be able to relate to his own relationship and here and here both the actors and the script does a great job to mimic real life “pain points” with your significant other. And with Paul Rudd it is almost harder to make a comedy not funny; ever since his fantastic Mike Hannigan character in Friends he is one of my comedy-favorites and with “I love you, Man“, he won my personal comedy Oscar. Also Judd Apatow’s kids do a great job playing the annoyed teenage daughter along with the corky younger sister. Also the supporting cast with Jason Segal, Megan Fox and Albert Brooks were really good additions and helped the movie to be better. Having said all that, with this enormously talented cast, you have to be able to pull off more that what “This is 40” ultimately is; a movie which can’t decide between slapstick comedy, feel-good dramedy and rom-com.

Admittedly it is hard to write a script which has enough material to entertain the audience, tell a good story and hit every punchline perfectly. But that’s exactly where Judd Apatow should have a made a decision as to what he actually wants to tell the audience and how he wants to convey the message. And as comedy pro, he should know that shooting a 134 minute comedy is probably a little bit of a stretch. Whereas some jokes worked really well (like Paul Rudd in the bathroom or certain interruptions in the mertial love life); other jokes or attempts to create a running theme just completely didn’t work (like having the Lost theme). And looking at Judd Apatow’s resume with movies you could almost call comedy-classics like “40-year Old Virgin” or “Knocked-Up” (which is kind of the prequel to “This is 40”), I was really hoping for more to come.

So all in all, I don’t regret having spent an evening watching “This is 40”. It was entertaining enough, but I’m happy I didn’t actually end up spending 12 Dollars in the movie theater. Too many jokes didn’t work, the movie was too long and this cast should be able to deliver more. 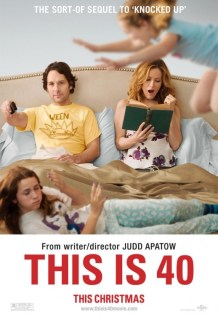