So much has been written about “0D30″…a solid 93% at Rotten Tomatoes, five nominations by the Academy and apparently Kathryn Bigelow’s best work so far. It was hard to go into this movie without high expectations, and given that I wasn’t the absolute biggest fan of “The Hurt Locker”, the bars could not have been higher. And all in all, my expectations were met and this was a great movie.

A lot had been reported on Jessica Chastain’s performance which I personally thought was great – but not necessarily Oscar-good. Her character showed persistence but if I compare her to the obvious benchmark in a similar role (Claire Danes in Homeland), she lacks the passion and almost obscure level of obsession with her goal.However, a big strength of the movie is indeed the cast, everyone fits perfectly into their roles with Kyle “Coach Taylor” Chandler, Mark Strong and James Gandolfini (awesome as Leon Panetta) standing out. 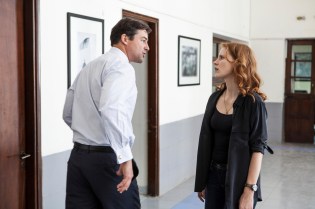 Big props go to Mark Boal for writing an excellent script, he puts the entire hunt into the context of a timeline starting at the obvious date – 9/11. By giving the story such a long timeframe, the film gives itself the ability of really showing the struggle and longevity of the hunt for “OBL”. And for once in a CIA movie, the terrorists don’t get captured by a High-Def satellite picture picking their nose in their hideout. The movie makes the point that patience and a lot of tedious legwork will be required to get to your goals in this world. One additional remark is how Kathryn Bigelow incorporates the element of shocking surprise very effectively into the movie to strengthen the significance and intensity of this mission. 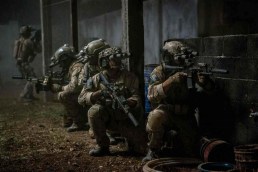 Even though I try to stay focused on the actual movie without getting sidetracked by the “politics” of it, there has to be mention of the torture scenes which already made the press. One trap which the movie unfortunately falls into is the justification of torture as a necessity and even putting down the “current” administration as being “soft on torture”. I feel that the movie had a chance here to make a statement on this highly controversial topic and it took the wrong stance. There is another pretty obvious trap which this movie luckily does not fall into – sensationalizing Osama Bin Laden’s killing. Who doesn’t remember the celebrations on the street which occurred everywhere across the US – which despite the fact that the world is a better place without Bin Laden still somewhat alienated me. The movie doesn’t use this scenario to end on a Michael Bay-esque “America-is-so-awesome”-note but tries to be more factual and realistic. It actually takes a completely different approach and focusses entirely on the main character of the story – Jessica “Maya” Chastain – how will her life be after Bin Laden?

In a few words, a great spy thriller which keeps you at your toes for the full 157 min with a great cast and an awesome team behind the scenes i.e. Kathryn Bigelow capturing a great script by Mark Boal. My favorite KB movie remains Point Break though….In a nutshell, great movie which is worth the trip to the movie theater.